Further information or details on any aspect of the project may be obtained on request at:   rgyccoastalrowing@gmail.com

Today is a big day for the future of Royal Gourock Yacht Club. We took delivery of our first St Ayles skiff and despite the atrocious weather our volunteers showed up to admire the new boat and to get her moved into safe storage. There are still some minor painting and finishing touches to complete and with summer approaching we cannot wait to get her out on the water. 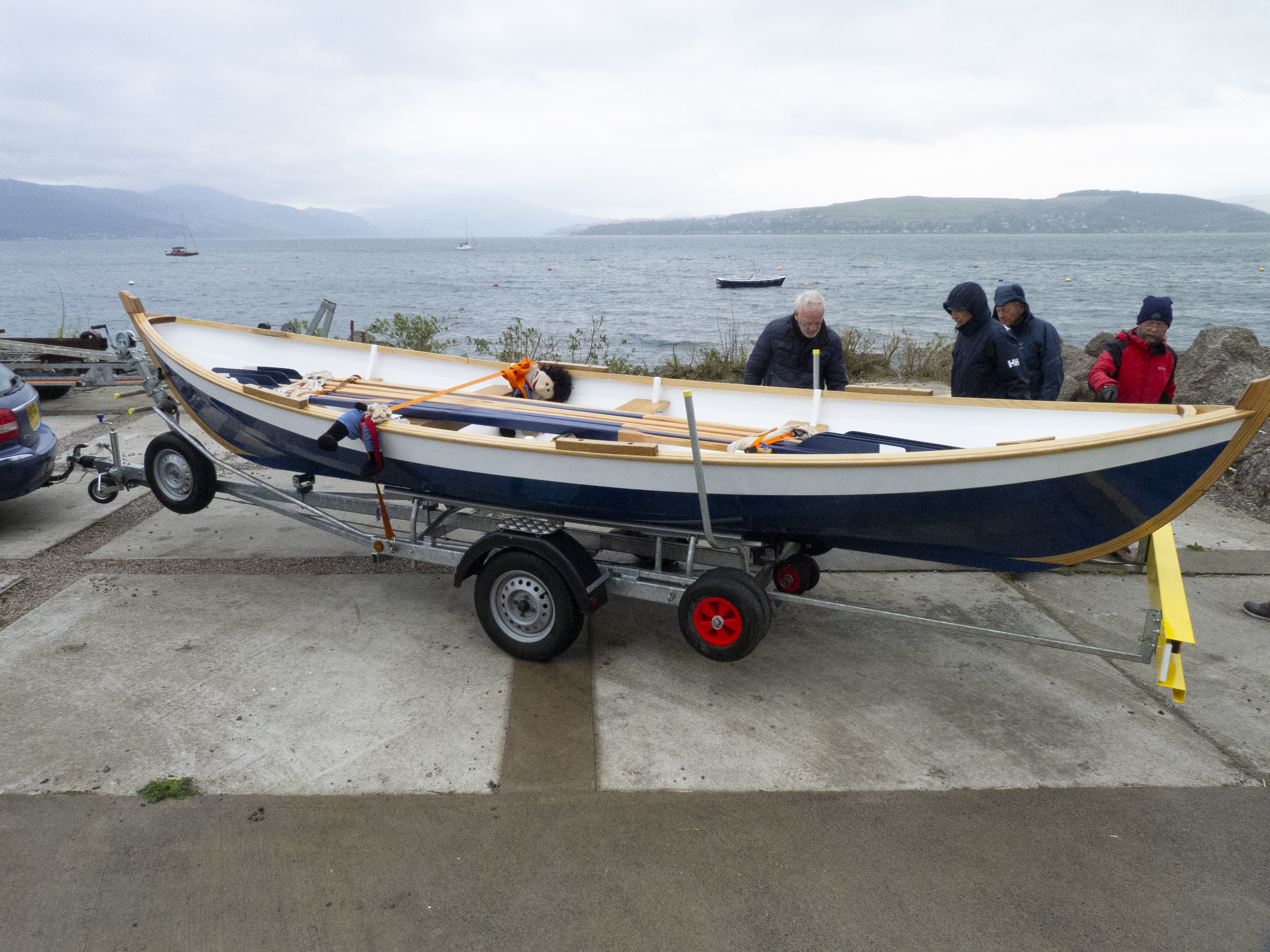 The European LEADER Grant element of the project is now complete and the final Grant payment was received in December 2020. The professionally built St Ayles Skiff, Hull UK244, is complete and on its trailer in the Boatbuilding Workshop at the Scottish Maritime Museum (SMM) in Irvine, and ready to be transported back to our Club premises. The volunteer St Ayles Skiff Hull, UK245, is also at the SMM, fully framed and planked but with about 50% of the work still to be completed, for which all the materials are already purchased. The 6 sets of skiff oars have been completed and are also at the SMM. We have taken delivery of the the two Teal Combi-Trailers (each comprising a road trailer and an integral launch trolley); one is at the SMM and the second is in the RGYC dinghy park. We have also completed procurement of all the Ancillary Items (comprising warps, anchors & rode, fenders, lifejackets, radios, flares, paddles, etc) necessary to run a coastal rowing leisure, training and racing programme at RGYC. The 2 acrylic covers for the skiffs are at the manufacturers in Longniddry, East Lothian. The coronavirus pandemic restrictions resulted in significant delays to the project, nevertheless we managed to receive the bulk of the grant income and look forward to reinvigorating the project during the summer of 2021. RGYC acknowledges the financial assistance received from the European LEADER Grant Programme, and the help from the staff in the Grant Office who have been very supportive of our coastal rowing initiative. 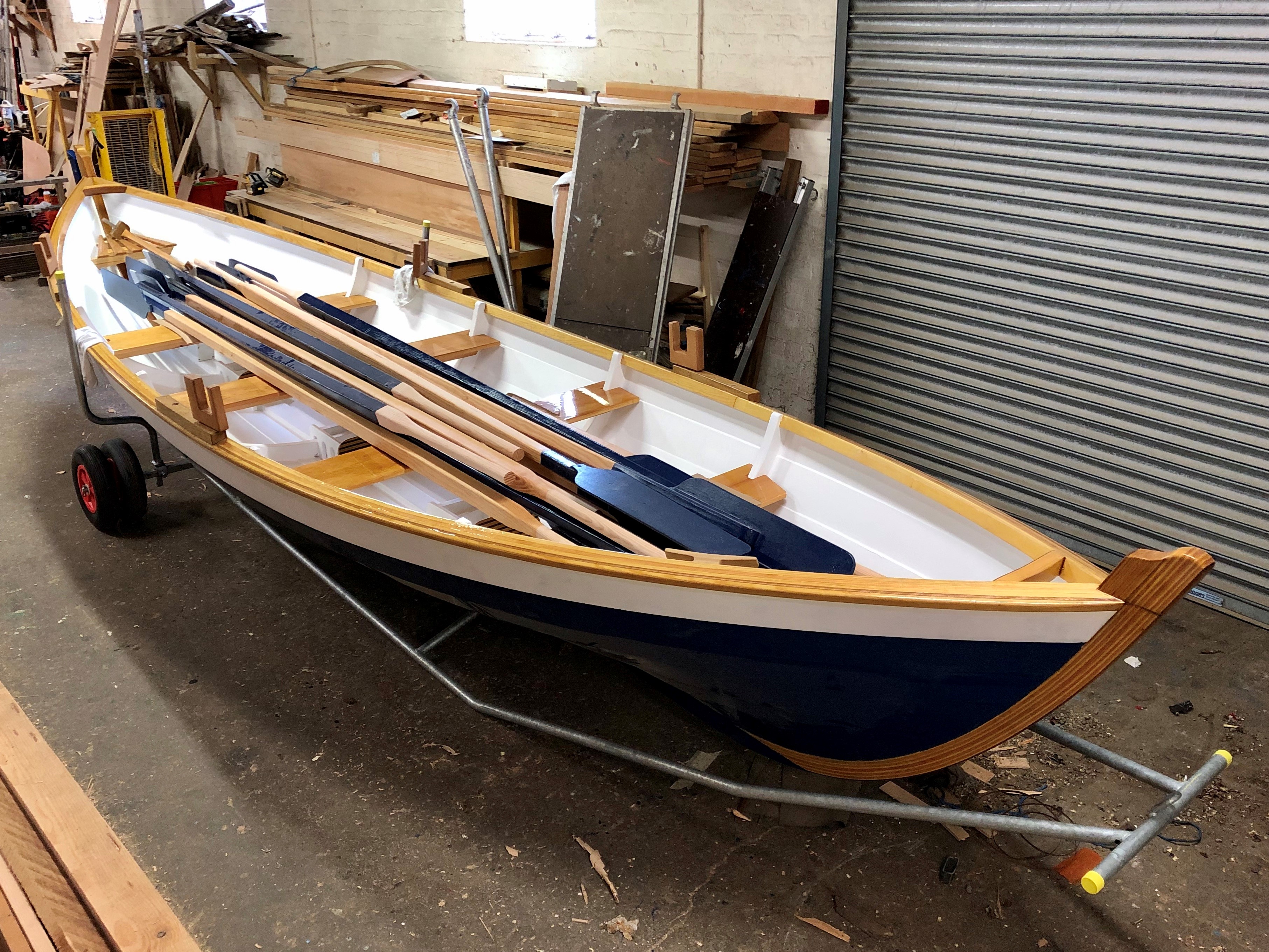 Ancillary Items for the Skiffs 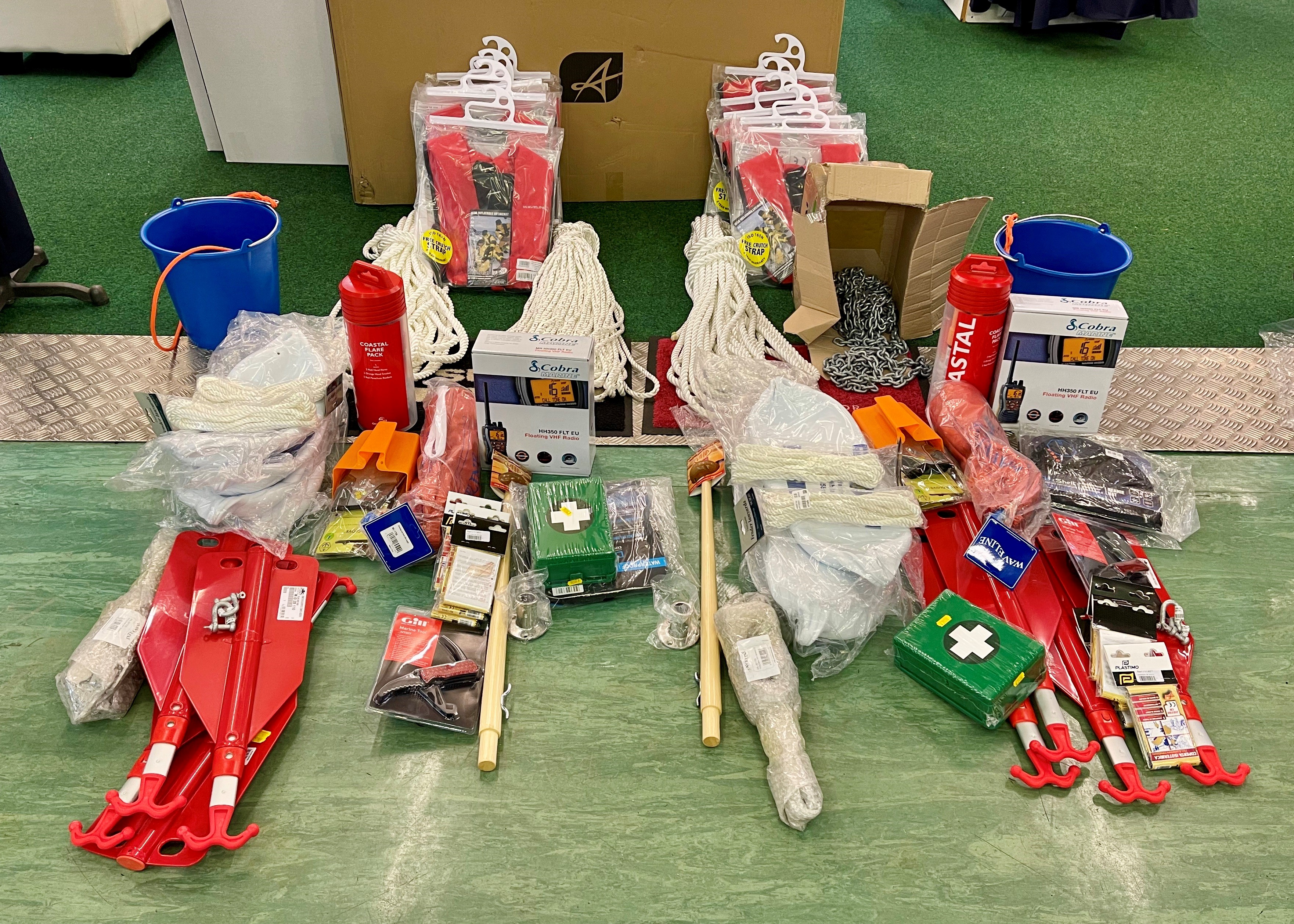 The professional build St Ayles Skiff UK244 has been completed by the Scottish Maritime Museum (SMM) and it remains in storage in their Boatbuilding Workshop, partly due to COVID -19 restrictions, and partly because the weatherproof covers for the two skiffs have not been received yet.
• Our second St Ayles Skiff UK245 being built by RGYC volunteers is framed and planked but progress was hampered by the May to July 2020 lockdown, and again from 10 October 2020 we have not been able to work on the skiff due to the tiered Covid-19 restrictions in Scotland.
• We have taken possession of the two Teal Combi-Trailers – one is in the RGYC dinghy park and the other is at SMM ready to transport our first skiff back.
• The six sets of four oars are finished, comprising both training and racing sets. 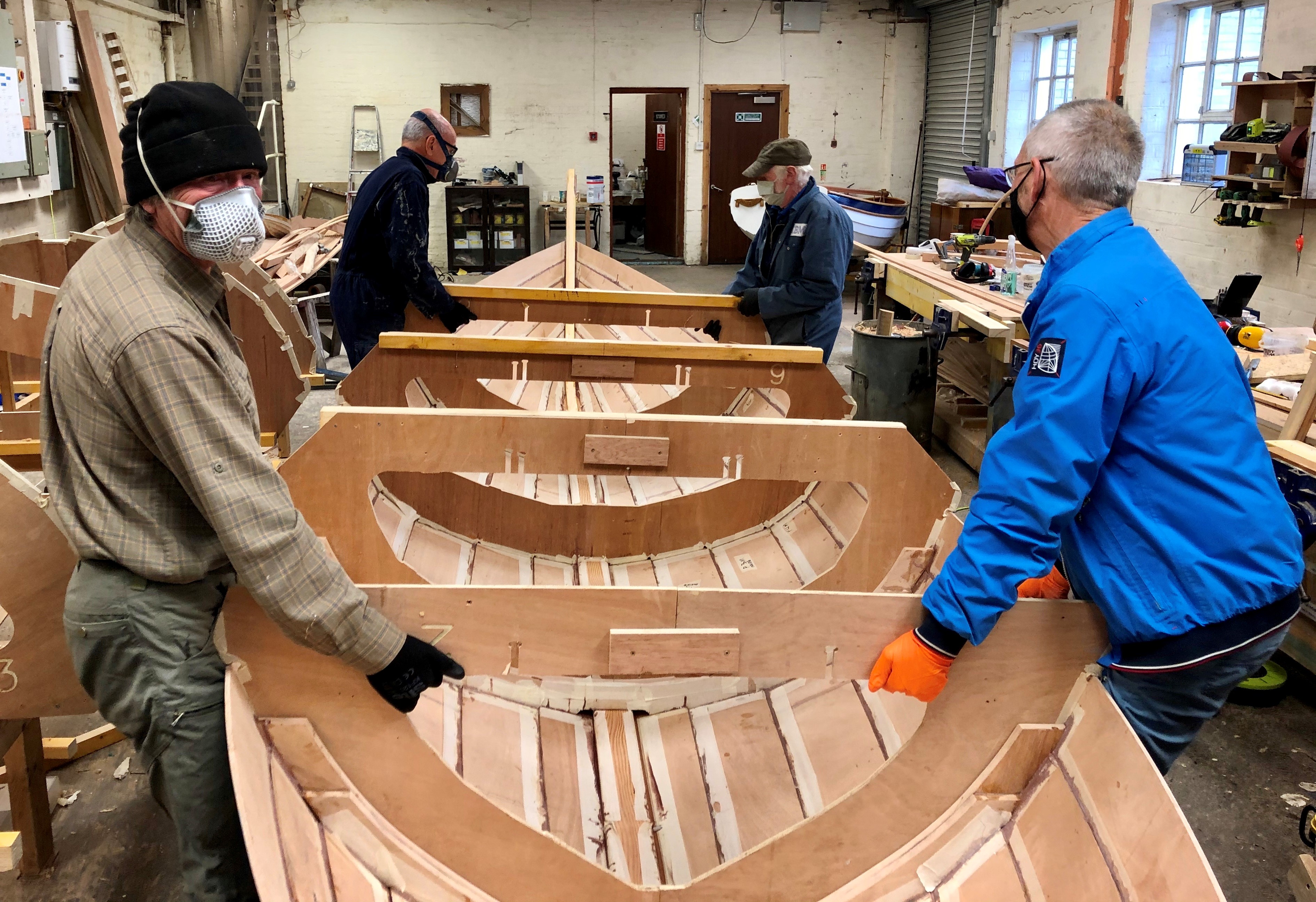 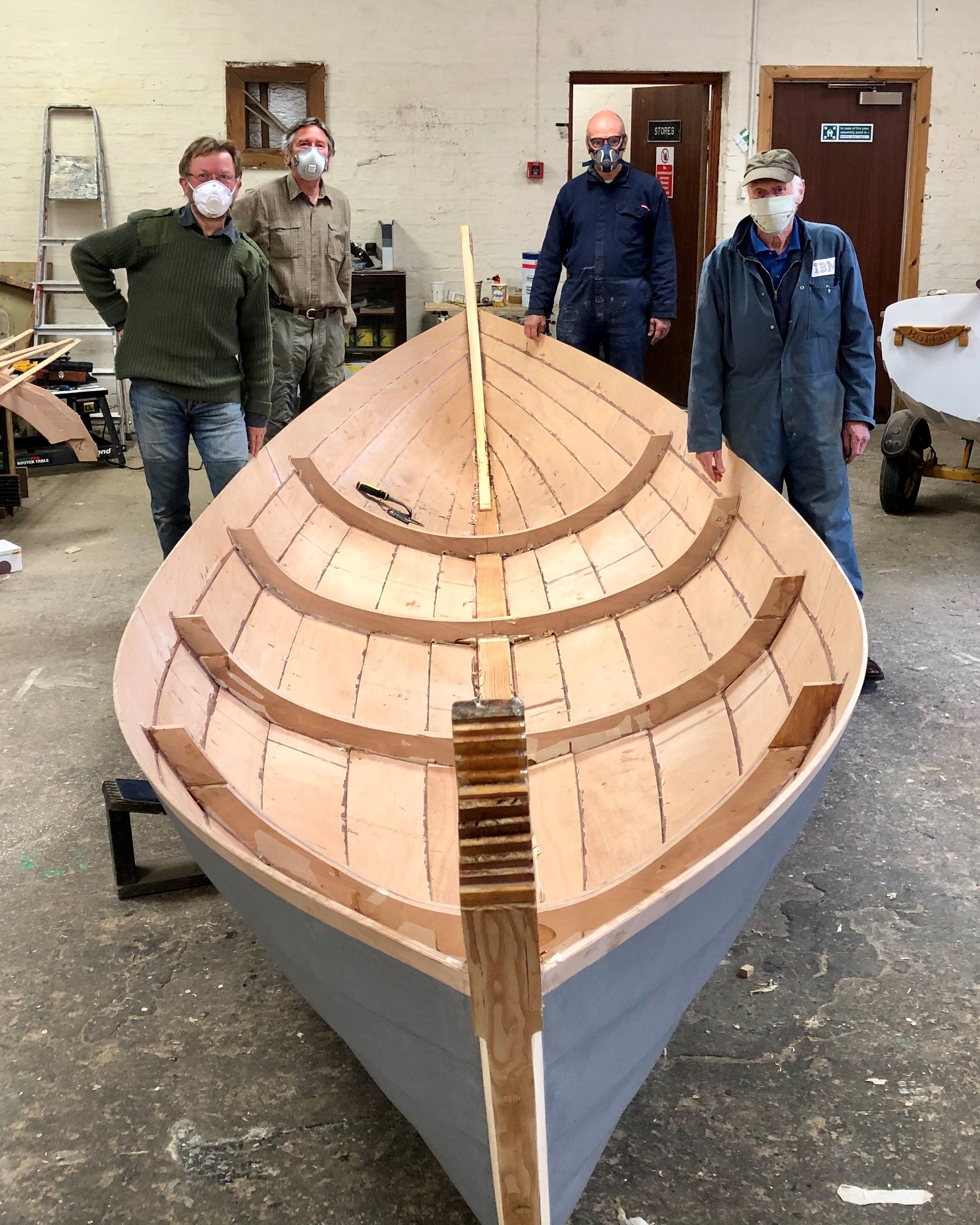 The RGYC Team of ’Skiffie Builders’ have reached the first important waypoint in the journey of constructing our volunteer built St Ayles Skiff. With the skilled efforts of Club Members Ian Parsons and Steve Scott on Friday 28th August, and Robert Kitchin and Paul McGloin on Saturday 29 August, the 6th and final marine ply clinker strakes were glued and cramped into position on both port and starboard sides of Hull UK245.

After the strakes have been allowed to cure into place, the finger cramps will be removed and the plank ends dressed to the inner stem and stern pieces. The plan next weekend is to commence fitting the outer keel and outer stem & stern, ready for the next important milestone – the releasing of the skiff from its mould and turning it upright.

Our professionally built St Ayles skiff, Hull244, is now receiving the final paint coats of RGYC ‘Oxford Blue’ and together with the final internal timber work, should be ready for transportation to the Club in late September.

Work has restarted on our volunteer built St Ayles skiff, Hull UK245, and she is progressing well. A big thanks to the build team. 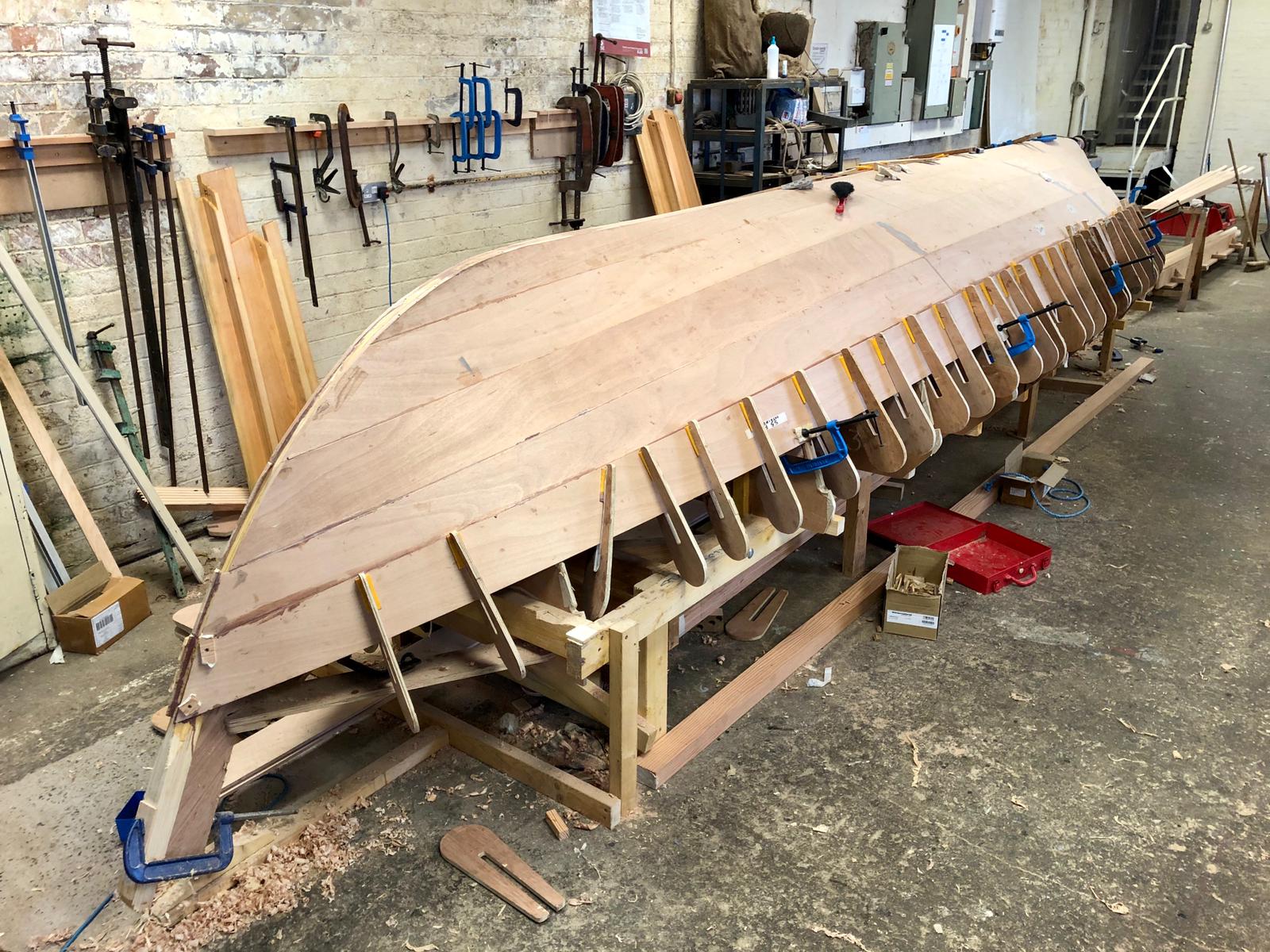 The build team are making fantastic progress on both hulls… 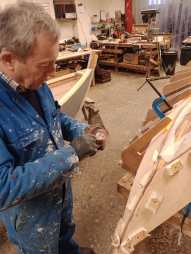 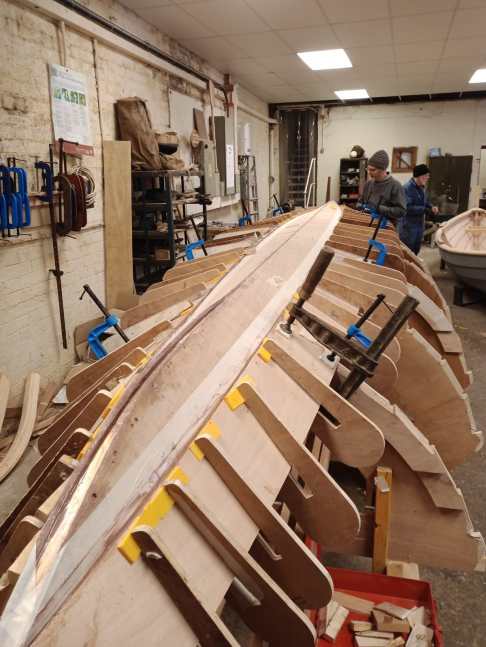 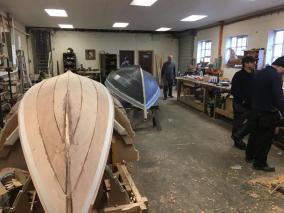 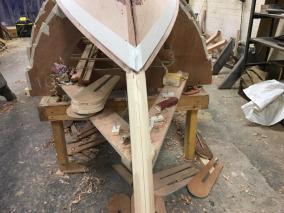 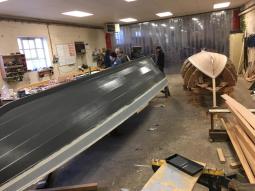 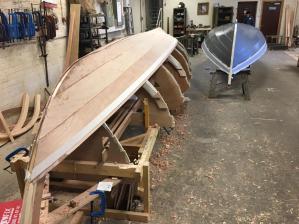 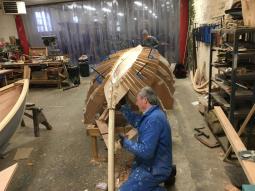 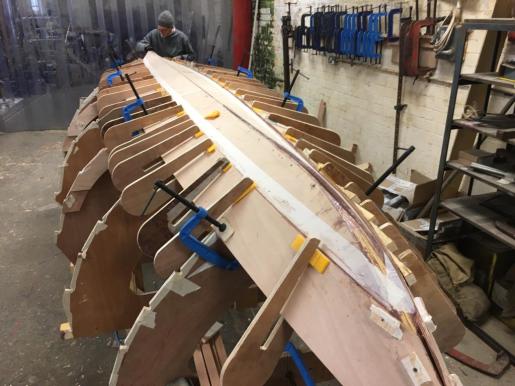 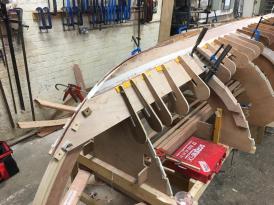 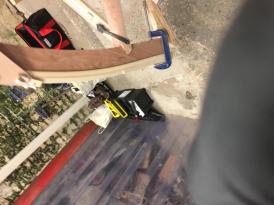 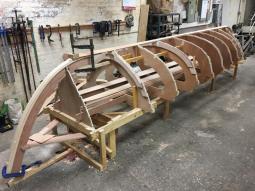 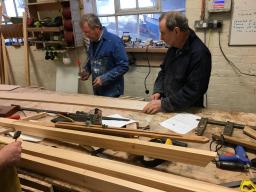 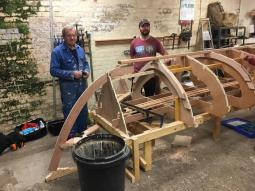 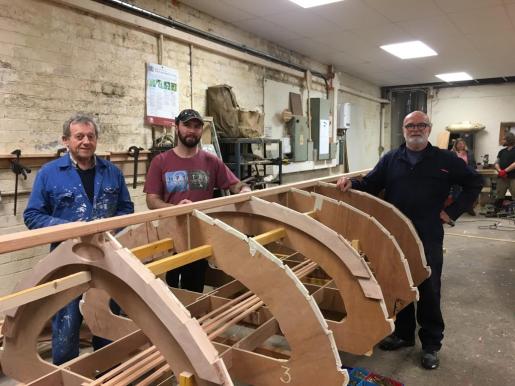 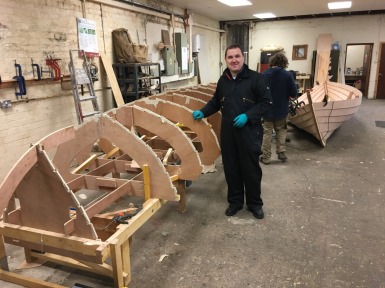 The team down at the Scottish Maritime Museum in Irvine are making great progress with both hulls. 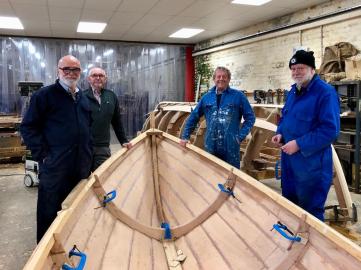 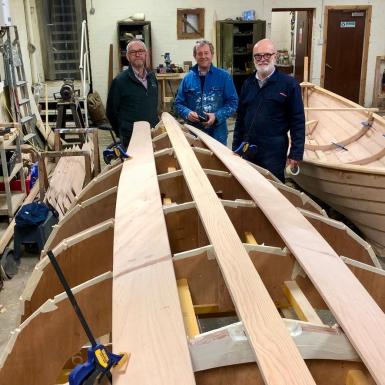 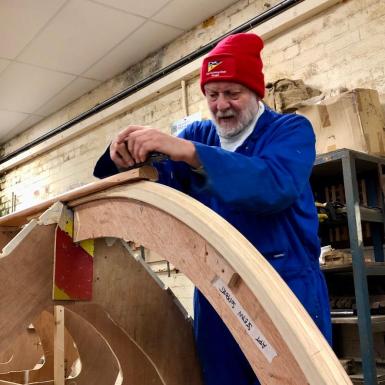 There has been major progress recently with construction of RGYC’s first St Ayles Skiff in the Boatbuilding Workshop at the Scottish Maritime Museum in Irvine.   Hull number UK244 has been released from it’s mould and turned upright.

Additional photos of the construction and the hard working members of our team. 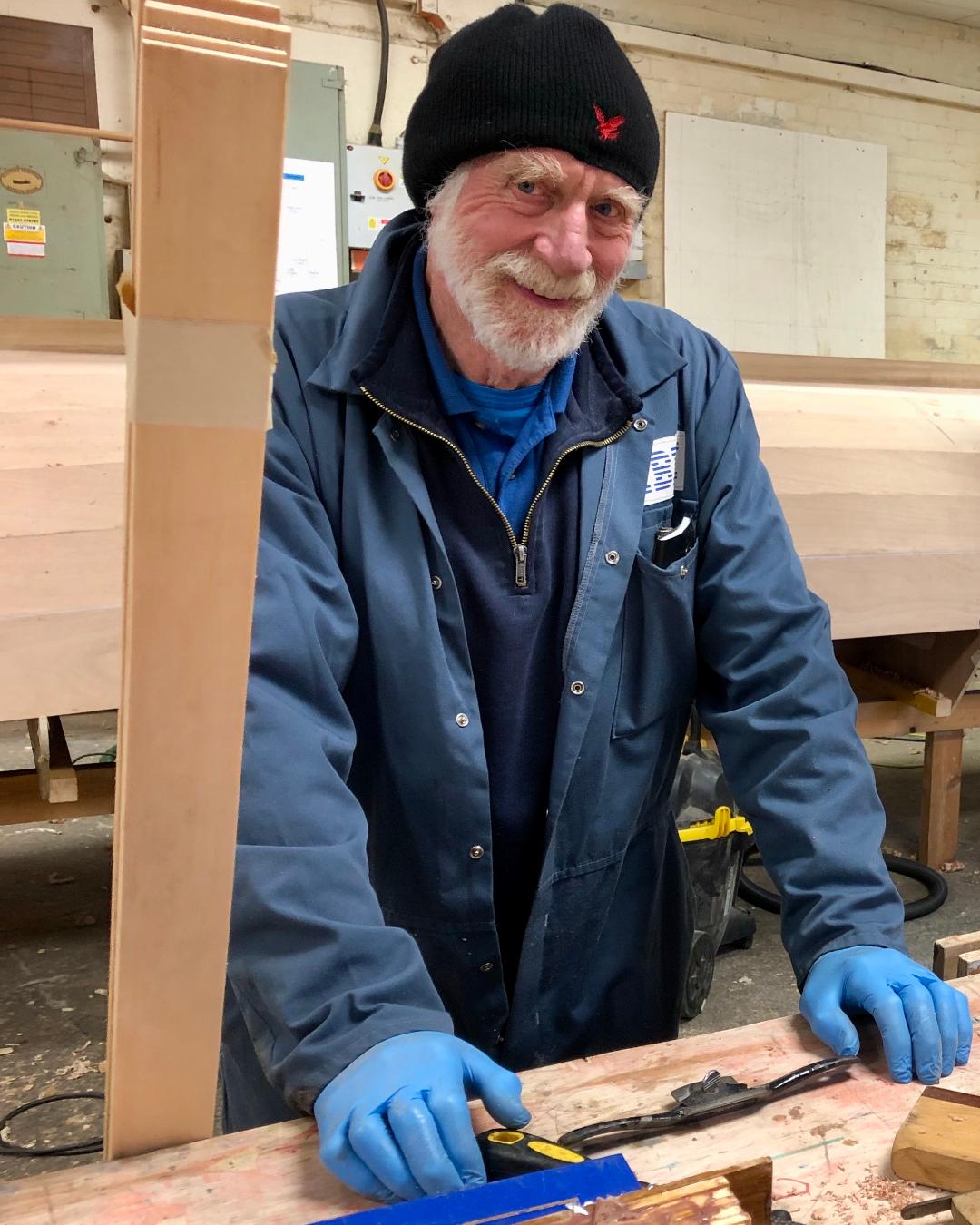 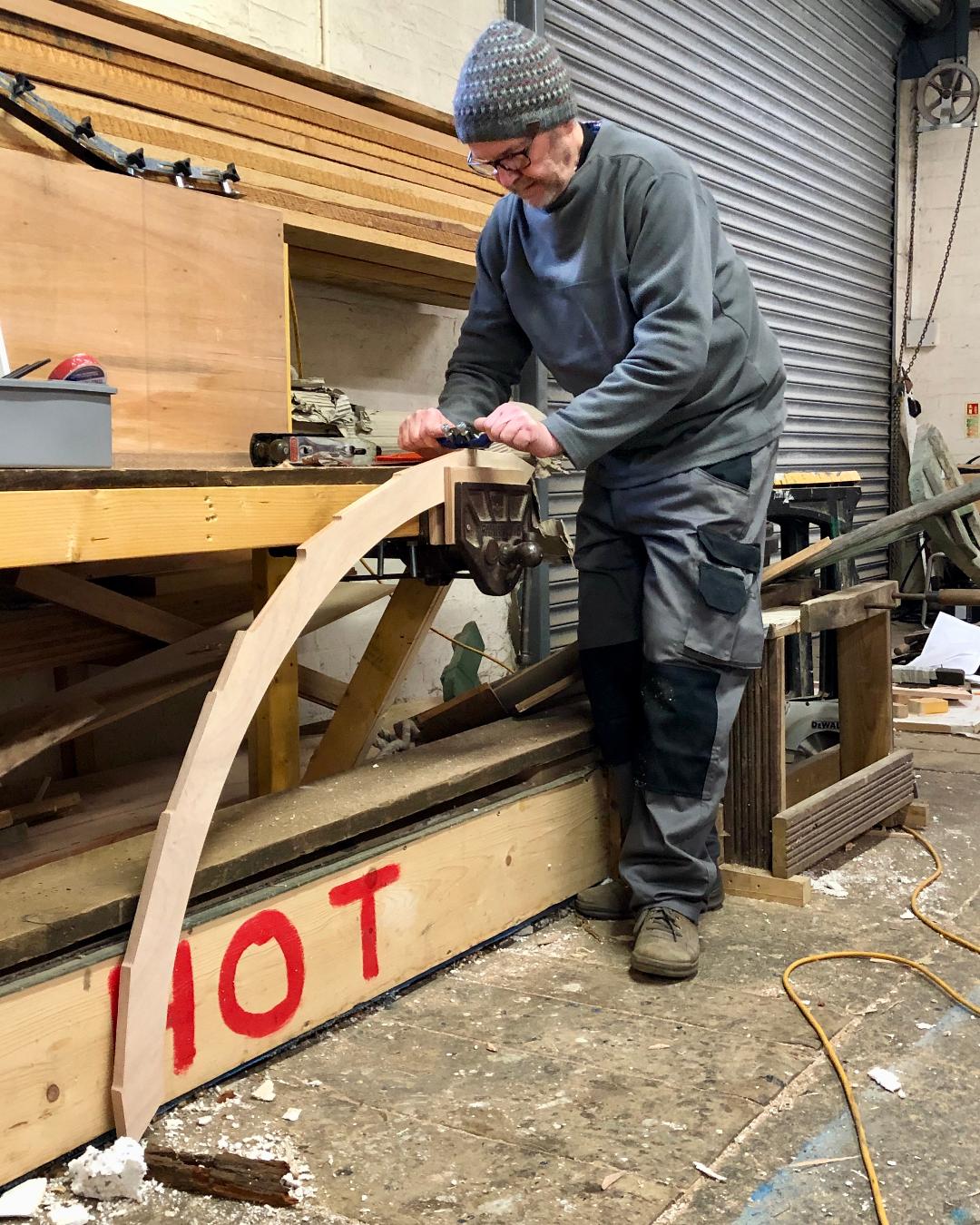 Travel directions to the Club are available here Travel Directions

How to find us